4 Ways to Know He’s a God of Second Chances 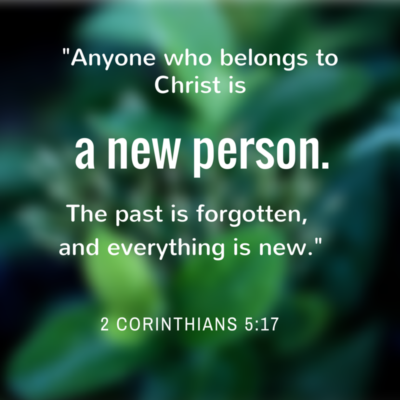 4 Ways to Know He’s a God of Second Chances

Do you ever feel like you’ve completely blown it with God? As if He’s thinking I’ve had it. I’ve given you enough chances. I’m done with you.

You don’t have to feel that way any longer. Scripture makes it very clear that we serve a God of a second chance, because He knew we’d never get it right the first time…and maybe not the third or fourth time, either.

God doesn’t give you and me just one shot at impressing Him or earning His love or getting it right. In fact, we already had that shot when Adam and Eve chose their way over God’s (Genesis 3:1-19). So, God found a way to give us a second chance through the sinless life, sacrificial death, and glorious resurrection of His Son, Jesus. When we repent of our sin condition (not just one or two sins, but the fact that we now have a sin nature – Romans 3:23), and surrender our lives to Him, through accepting Jesus’ atonement for us on the cross, God sees us as righteous and unblemished as His Perfect Son. Jesus is our second chance.

Yet, because we’re in this fleshly body, we continue to sin. So what about when we blow it after we’ve received Him as our personal Savior? What if we just can’t get it right even when we know better? Here are four ways to know He is a God of second chances:

“He has not dealt with us according to our sins,
Nor rewarded us according to our guilty deeds.
For as high as the heavens are above the earth,
So great is His mercy toward those who fear Him.
As far as the east is from the west,
So far has He removed our wrongdoings from us” (NASB).

If God were to deal with us according to our sins, He’d be punishing us every time we committed an offense against Him. Yet, that next verse in the passage compares God’s mercy and compassion to that of an earthly father who loves his children:

2. He’s a God of second chances because Jesus taught it.

We can tend to live by a “three strikes you’re out” motto when it comes to others’ offenses toward us. But Jesus was aware of our tendency to blow people off, or cut them off altogether, if they offended us more than once or twice.

Peter asked Jesus how many times he should forgive the same person who offended him. He probably thought he was being extra generous when he asked Jesus if he should forgive “up to seven times.” But Jesus told Peter: “not seven times, but seventy-seven times” (Matthew 18:21-22). Jesus was teaching we must forgive our offender an unlimited amount of times, because that’s the way our Heavenly Father has forgiven us.

3. He’s a God of second chances because Jesus demonstrated it.

When the Jewish religious leaders brought to the temple courts a woman caught in adultery and made her face Jesus and an accusing crowd, they expected Jesus to recite the Jewish law and shame the woman publicly, and give them permission to stone her to death. But Jesus, instead, showed compassion on her. He knew all about the sinful details of her life, but He gave her a second chance when He faced down her accusers with the words: “Let any one of you who is without sin be the first to throw a stone at her.” When all of her accusers hung their heads and walked away, Jesus compassionately told the woman “Neither do I condemn you…Go now and leave your life of sin” (John 8:1-11).

Jesus doesn’t tolerate or excuse our sin, but He responds with grace and mercy when He knows we are truly sorry for our offenses. As Jesus is God in the flesh, He demonstrated that our Heavenly Father is a God of second chances.

4. He’s a God of second chances because He continues to deliver us today.

I had a lot on my mind recently when I was washing my car and didn’t realize my purse had fallen off of my car seat and my wallet had rolled out the door and onto the ground. It wasn’t until I was backing out of the car wash stall that a man ran after my car waving my wallet at me. Had I driven off without it, I would’ve missed my plane a couple days later without a valid picture ID or any of my credit cards.

“My mouth will tell of your righteous deeds,
of your saving acts all day long—
though I know not how to relate them all.”

God could’ve shaken His head and thought, There she goes again, not paying attention to what is happening around her. I’ll teach her to be more focused. Wait ‘til she misses her plane in a few days because she didn’t watch out for her wallet!

But instead, once again, He saved me all day long by continuing to watch out for me, whether I deserved it or not. Our God is not one who waits for us to mess up, or delights in punishing us when we do. Neither is He One who finds joy in seeing us disappointed, or living the consequences of our mistakes. Scripture calls Him patient, merciful, forgiving, and rescuing. He is the God who “rescued me because he delighted in me” (Psalm 18:19). And that is a God of second chances.

In James 1:5 we are told, “If any of you lacks wisdom [which leads to sinful behavior], you should ask God, who gives generously to all without finding fault, and it will be given to you” (emphasis added).

Notice the passage doesn’t say that God will give you wisdom grudgingly, after reminding you of all the times you have failed to use that wisdom. No, instead, He will give wisdom to us generously and without finding fault, meaning He won’t drudge up the previous times we failed to use the wisdom He gave us. He’ll simply give it to us again – and not sparingly, but generously – because He is the God of a second chance.

God’s Word says we all have sinned and fall short of God’s glory (Romans 3:23). Therefore, because you and I serve a God of second, third, and a million chances, we can be saved, too, and experience life eternal with him – both now and one day in heaven. Share that good news with someone today who really needs to hear it.

To get to know better this God of second chances, see my books, Letting God Meet Your Emotional Needs, and Women on the Edge.

Cindi McMenamin is an award-winning author and national speaker who helps women find strength for the soul. She has nearly 35 years experience ministering to women and inspiring them to let God meet their emotional needs, grow stronger through their alone times, and pursue their dreams with boldness.
← PREVIOUS POST
When You've Disappointed Someone -- Again
NEXT POST →
4 Benefits to Starting Your Day in Prayer

on 4 Ways to Know He’s a God of Second Chances.