3 Reasons Why I’m Choosing Not to Worry Anymore 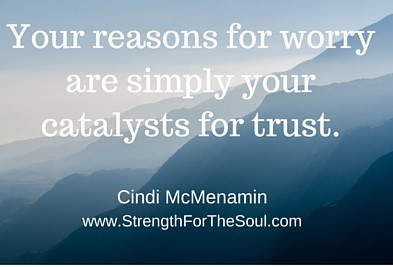 3 Reasons Why I’m Choosing Not to Worry Anymore

There are three things I could really worry and stress about right now.

And yet, I’m choosing not to.

Here are the concerns pressing in on me:

I guess you could say our lives are back to a day-to-day dependence on God when it comes to finances, work, our health, and so many other things. But then…isn’t everyone’s when you really think about it? Who of us is really in control of our circumstances from day to day? And when we recognize God has all our concerns in His hands, there is peace.

Philippians 4:19 tells us: “And my God will supply all your needs according to His riches in glory in Christ Jesus.”

I’m grateful God has me and my family in that place where we must look for Him at every turn and wait for Him to come through for us at the end of every day. It builds our faith. It increases our dependence on Him. It keeps us humble. It keeps us in perspective. It keeps us on our knees in prayer.

THAT is why I’m choosing not to worry about all that concerns me and to trust the One who can change things at any moment.

What is the upside of what God is doing in your life in spite of what would normally cause you to worry? As you focus on the positives, you may begin to see what God wants to show you at this otherwise stressful time.

What is the one (or more) reason(s) you will go worry-free this year? Your reasons for worry are simply your catalysts for trust.

See my newest book, 10 Secrets to Becoming a Worry-Free Mom, to help you trust God with what is closest to your heart.

Cindi McMenamin is an award-winning author and national speaker who helps women find strength for the soul. She has nearly 35 years experience ministering to women and inspiring them to let God meet their emotional needs, grow stronger through their alone times, and pursue their dreams with boldness.
← PREVIOUS POST
What to Do With Your 'What Ifs'
NEXT POST →
5 Reasons You Don't Need to Worry About Love

on 3 Reasons Why I’m Choosing Not to Worry Anymore.

Does it feel like God is delaying your dream? Here

7 Ways God is Your Healer -- Even Today! God didn'

Don't be robbed of your peace, your plans or your

Do Jesus' words "Peace, Be Still!" apply to us tod

How to Lovingly Respond to Your Adult Child's Pain

This keeps me in perspective during these uncertai

The Day I Snapped From All This COVID Crud! -- It

7 Loving Ways to Respond When You're Offended -- Y

Yes it's a sin-stained, messed up world and these

Need Help to Better Understand Your Bible? -- The