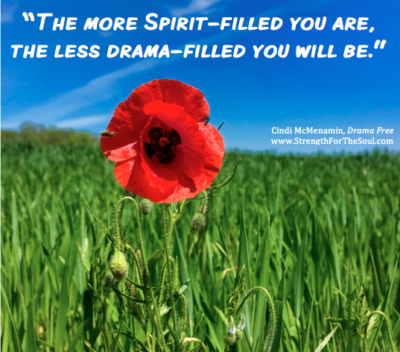 I learned during my teen years that if you don’t have the proper role models in front of you, you have to learn through the opposites. In other words, if there is dysfunction around you, look at what NOT to do and God can use that, too.

One thing I love about the Bible is that it not only shows us how to live, but how to NOT live. By looking at the mistakes, hardened hearts, and critical natures of some women in the Bible, we can be warned to keep clear of certain attitudes and lifestyles. Last week I gave you “5 Women NOT to be Like.” Here are five  more women who can teach us how NOT to live.

6. Penninah – the insecure woman with the fake smile.

Penninah, the mom of several children, spent “year after year” provoking Hannah – her husband’s favored wife who was childless. Perhaps Penninah was trying to console her hurting heart by provoking Hannah to tears and making herself feel superior when she was the one who was downright miserable (1 Samuel 1:1-7).

Don’t put on a fake smile or only post the happy moments on Facebook or Instagram. Be real. Talk about what hurts. You may find you have more friends that way.

7. Delilah– the woman who didn’t care whom she hurt.

Delilah was the tempting seductress who pretended to be in love with Samson in order to sell him out and get rich. Maybe she liked the idea of being the person who could get – and repeat – information that no one else knew. Or maybe she lost her morals when seduced by the promise of a boatload of money. Either way, she ratted Samson out enough times that he should’ve been on to her.

Scripture says “with such nagging she prodded him day after day [to tell her the secret of his strength] until he was tired to death. So he told her everything” (Judges 16:16-17). Delilah ratted him out again and “put him to sleep on her lap” so she could be right there, facing him, as the  Philistines shaved his head (thereby stripping him of his strength), restrained him, and gauged out his eyes. Then they led him away to prison (Judges 16:1-22). Some women will do anything to get the scoop and then repeat it, no matter who it hurts. Don’t be a Delilah.

8. Michal – the woman who let resentment ruin her.

Michal, the daughter of King Saul and the wife of soon-to-be-king David, witnessed her husband publically dancing in his underwear, judged the intentions of his heart, and resented him for it. This bitterness toward her husband not only affected her ability to ever have a child, it destroyed her marriage, as well (2 Samuel 6:16-23).

Don’t be a woman who holds resentment in your heart. God doesn’t take it lightly. Instead, talk maturely about what is bothering you. Better yet (and this is what I’m trying to do at the moment), talk to God about it first, then realize some things are better left unsaid and move on. Much drama can be spared when we learn what NOT to say.

This sorceress and murderous queen went down in history as the wickedest woman who ever lived. She incited evil in her husband, King Ahab (1 Kings 21:25), and at the mere mention of her name, the God-fearing prophet Elijah fled to the desert and hoped to die (1 Kings 19:1-4). Today, the dictionary defines “jezebel” as “an offensive term for a woman regarded as sexually immoral or manipulative.” Enough said. You don’t want to go there.

10. Herodias – the woman who couldn’t handle the truth.

This adulterous wife and foolish mother experienced rage when John the Baptist’s preaching convicted her of her sinful lifestyle. So she used her daughter to satisfy her hunger for revenge. After her daughter’s dancing pleased King Herod, Herodius told her daughter to ask the king for the head of John the Baptist on a platter. If he were dead he could no longer expose her sin (Matthew 14:1-12, Mark 6:14-29).

Don’t try to silence the truth if it hurts you to hear it. And don’t resent the person who exposes sin in your life. Ultimately that person is doing you a favor – especially if he or she is speaking the truth in love.

I loved hearing your thoughts on the first part of this blog last week. For more on how to not stir up drama around you, see my book, Drama Free, still on sale at my website for just $9.99 each plus shipping (while supplies last).

Cindi McMenamin is an award-winning author and national speaker who helps women find strength for the soul. She has nearly 35 years experience ministering to women and inspiring them to let God meet their emotional needs, grow stronger through their alone times, and pursue their dreams with boldness.
← PREVIOUS POST
A Woman to Inspire, Not Discourage You
NEXT POST →
5 Women NOT to be Like

5 More Women NOT to be Like | Strength for the Soul