When You’re Weary of Worshiping Alone 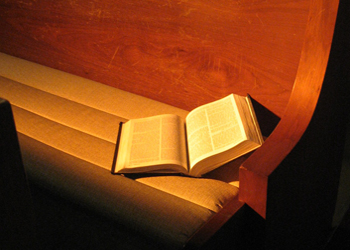 When You’re Weary of Worshiping Alone

Do you know what it’s like to sit in church, week after week, and feel lonely?

For years, Debe longed to have Randy worshiping alongside her. She was tired of sitting in church alone, singing songs of praise alone, taking notes on the pastor’s sermon alone. Her heart ached for her husband to experience what she did through the music and the message at church.

Because her heart was focused on her husband’s need to be there, Debe remembers filtering every sermon through her husband’s life. Randy needs to hear that, she would think. Or, This verse is for Randy.

After several years of worshiping alone, Debe became discouraged – and sometimes even depressed – that her husband was not joining her in the most important quest in her life, and she was not growing because of it. She finally decided it was time to leave the marriage so she could find someone who would share her heart, worship alongside her, and encourage her in her walk with God. But Debe’s pastor talked her out of it. He encouraged her to start focusing on her growth with the Lord, not her husband’s. As Debe began to do that, she discovered that there was a whole new side of God she never really knew before.

Worshiping alone then took on a whole new dimension, Debe said. “The intimacy of my worship began to increase as I looked to God – and not Randy’s presence beside me – to fill the longings of my heart. It became more one-on-one with Jesus and me. My spiritual and even emotional needs were being met during those times.”

The day Debe realized that worship was not about who was – or wasn’t – sitting next to her was the day she really learned to worship. And she also came to realize that being alone in worship could be a wonderful thing!

There are powerful stories in the Bible about women who were alone in worship. One of them was Hannah, the mother of Samuel. She knew well what it meant to worship alone, pray alone, and carry burdens on her heart alone. She desperately wanted a child more than anything else on earth. And one day she bitterly poured out her heart to God about it. She told Him of her longings, her sadness at seeing all the other women around her with children, her frustration that she couldn’t give her husband a child, and her sorrow at being the brunt of jokes from her husband’s other wife. She prayed, cried, and told God that if He would give her a child, she would give him back to the Lord for service in the temple all his life. This woman laid it on the line with God, and she did it alone. Her husband, Elkanah, must have been in another part of the temple worshiping and offering his sacrifices. But Elkanah didn’t need to be with Hannah. God met Hannah there as she prayed and worshiped alone. And He gave her that child she prayed for.

After weaning her son, Hannah again went to the temple, but this time she went to praise God for His gift to her and to leave her son with the priest. And she appeared to do that alone, as well. Do you ever wonder why she didn’t ask her husband, Elkanah, to pray with her for her child? Do you find it odd that it’s a mother’s prayer and song of praise that is recorded in 1 Samuel 2 and not one that is shared by the father, too? I tend to think that Hannah had such a deeply personal experience with God when she begged for a child that she wanted to be alone when she went back to God again. In her earlier visit to the temple, she had some “pouring out” to do and she did it alone. Later, after being given a child, she had some praising to do, and apparently she wanted to do that alone. It was personal –between her and God. And it didn’t matter to her, apparently, whether or not a man or someone else was beside her.

My friend, Sara, can relate. “Prayer is such a deeply personal thing between me and God, and I treasure those times alone with Him. My husband does pray with me, when I ask him to, but why would I want anyone else in the room with me when I’m pouring my heart out to God?” God had to show me – a pastor’s wife who many times feels alone in worship because my husband is in the pulpit ministering, rather than being alongside me – that praying to Him, and worshiping Him should always be a priority, no matter what the situation, and no matter who comes along.

I was encouraged recently – while looking through the Bible’s “song book” – that more than half of the Psalms were written from a personal perspective, recounting a personal experience with God. Only about 25 songs referred to corporate worship, using the terms “us” and “we.” This seems to indicate that much of worship takes place as a personal encounter with God. While we are not to forsake assembling together with other believers for corporate worship (Hebrews 10:25), we can’t live off of church worship services as our extent of worshiping God. And we can’t depend on someone else being there beside us for it to be meaningful. Worship must flow from our personal lives, and much of that flow will happen when we are alone.

When Debe switched her focus from who was sitting next to her and onto who was above her, worship became a much more fulfilling experience – to the point that God’s presence alone was what she longed for.

I know you’d prefer someone beside you as you worship, dear friend. But as long as you and I keep our gaze heavenward, we won’t feel as if we’re worshiping alone.

Cindi McMenamin is an award-winning author and national speaker who helps women find strength for the soul. She has nearly 35 years experience ministering to women and inspiring them to let God meet their emotional needs, grow stronger through their alone times, and pursue their dreams with boldness.
← PREVIOUS POST
When Your Husband Doesn't Share Your Faith
NEXT POST →
When You Feel Alone Spiritually
Categories
Also Find Cindi on:

When You’re Weary of Worshiping Alone | Strength for the Soul