When He Doesn’t Seem to Notice: Enticing Your Husband to Pursue Again 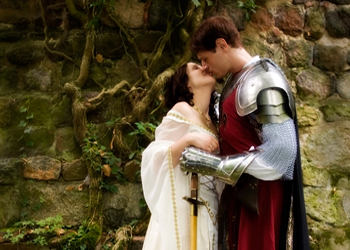 When He Doesn’t Seem to Notice: Enticing Your Husband to Pursue Again

As women, we long to be pursued.

We were made that way. It’s natural for us, then, as wives to want our husbands to continue to pursue us – long after our honeymoon. So why doesn’t he come after you the way he used to?

I used to think the reason my husband wasn’t actively pursuing me was just a matter of growing complacent in marriage. He knows I’m here, he knows I’m available to him, so after awhile, it’s just no big deal. Then one day I decided I must be doing – or not doing – something that is making him lose interest in me.

Hugh denied that there was a problem. No, he hadn’t lost interest in me. No, it wasn’t the extra weight I’d gained since my “too-skinny-anyway” days when I’d met him (my rationalization for midlife weight gain). No, it wasn’t that his eyes or heart had been lured away by another “mistress” (like work, or sleep, or a new hobby). For the most part, he said he was often just too drained of emotional and physical energy when he came home from his stressful job to think about anything other than sleep.

One of the ways we can wound our marriage – and our husbands – is to generalize a situation we’re going through and compare it to everyone else. If we read statistics in women’s magazines that the average couple has sex once or twice a week and it doesn’t happen that often in our homes, we can become concerned and wonder what’s wrong with our husbands, or us on weeks when we aren’t meeting that “quota” and thus being representative of the national average. We need to stop comparing our husbands to everyone else and start looking at who he is and all that makes up his life – the number of hours he works, his health habits, what he eats, the amount of sleep he gets, whether or not he exercises, the pressures he faces, the projects he’s working on, and add to those factors his age, his medical history, any medications he is taking, and his physiological makeup, and you have one man with about a billion reasons for why he might be not meeting the “national average” when it comes to how much he is – or is not – pursuing you, sexually. In other words, don’t take it personally.

Sometimes, your husband’s lack of motivation to pursue you might come down to his fear of rejection. Perhaps he’s been burned. If you’ve ever brushed off his advances (and who of us hasn’t when we have children to take care of, work to finish, deadlines to complete, dinner to cook, laundry to fold, or just a million other things on our mind?), then he has already experienced the risk and resulting humiliation of you telling him “no.” And that may be why he refuses to take that risk again. He may figure “I’ve initiated so many times, I’m not going to anymore. If she’s interested, she’ll come after me for a change.”

As much as a woman can feel hurt when she experiences rejection by her husband, a man can feel that wound even more intensely. Author and marriage expert Dennis Rainey says: “Most men find initiating the sex act one of the riskiest ventures he could ever make. Why? Each time he initiates sex, he risks rejection.” Rainey goes on to say “When a man is rejected often enough, he typically internalizes his anger, his hurt, and his disappointment until such time when the rejection drives him to one of several reactions – none of them are good. Either he will give up on the relationship, he will seek alternative sexual outlets such as pornography, or he might compromise his wedding vows by pursuing female affirmation elsewhere.”

Can you see how very important you are when it comes to your husband’s need to feel affirmed as a man, sexually? It isn’t a desire or need based on selfishness. It is a normal desire and need. He was created that way. Rainey continues: “Your husband’s sexuality is so much a part of who he is that it affects virtually every part of his life. The wise woman understands that her man longs to be needed sexually by her. If you really want to get to the bottom line for men, and you really want to express love to your husband in a powerful way, just express to your husband that you need him sexually.”

Maybe He Needs a ‘Boost’

With age, comes inevitable loss. Loss of (or decreasing) memory, loss of energy, loss of hair, decreasing metabolism, and – for men, especially – decreasing testosterone levels. It’s just a fact. A man’s sexual drive decreases as he ages. So in many ways, the roles reverse as we get older. He initiated back when you first got married, back when you needed a long time to warm up and get in the mood. Now that his testosterone level has decreased, he may be the one who needs help with the “warm up.” That’s where you come in.

Remember the days you thought long and hard about what to wear, how to do your hair, even what to say when you were around him? You wanted to make the best impression on him so he would ask you out again. Deep inside, you wanted him to love you for who you are. But first he needed to fall in love with what he saw.

As one marriage and family therapist says: “When we’re dating, we’re flirty. We do our hair all cute and wear cute clothes. We are appealing to their sexual desire. But when we get married, we resent their sexual desire. We expect them to just love us for who we are inside.”

Well of course our husbands should love us for who we are inside. But they are still very visually-oriented when it comes to their sexual drive. Males are naturally attracted to the beauty, softness, and sex appeal of females. So be the woman he loves to look at just as much as you once were. And be the woman he enjoyed spending time with, just like you were when the two of you were dating. Chances are you behaved much differently toward him when you were dating than you do now, a few or several years into marriage.

You can once again be the woman your husband fell in love with by asking him what three qualities about you attracted him the most when you first met or married. Then, write those three things down, pray about them, and seek to incorporate those qualities into your life. Think of practical ways to focus on those three on a daily basis so you remember (and apply) what first attracted him to you.

Cindi McMenamin is an award-winning author and national speaker who helps women find strength for the soul. She has nearly 35 years experience ministering to women and inspiring them to let God meet their emotional needs, grow stronger through their alone times, and pursue their dreams with boldness.
← PREVIOUS POST
The ABCs of Being Irresistible in Your Husband's Eyes
NEXT POST →
What Speaks Love to Your Husband
Categories
Also Find Cindi on:

When He Doesn’t Seem to Notice: Enticing Your Husband to Pursue Again | Strength for the Soul